We Need to Talk About Kevin – Happy Kevin Mitchell Day!

(EDITOR’S NOTE – This was suppose to run on April 26 but someone in the office screwed up royally. Thanks a lot Karen. You’re fired!)

A lot of things happened in 1989. It was a very eventful year. The Berlin Wall fell. Apartheid started to end. The Internet was born.

And in San Francisco the world shook.

No I’m not talking about the Earthquake that interrupted the World Series, at least not yet.

No I’m talking about Kevin Mitchell.

By 1989 Kevin Mitchell was a 27 year old journeyman Outfielder mostly known for being a bit player on the 86 N.Y. Mets World Series winning team.

Three years and two trades later Mitchell was with the SF Giants and nothing in his as yet unremarkable career suggested what he was about to do in 1989.

Mitchell started the season with 2 HR and 6 RBI in his first two games. Not bad for a utility outfielder with previous career highs of 22 HR and 80 RBI respectively.

But it was what he did in Left Field on April 26 in St. Louis that put the name Kevin Mitchell on the map and set up his truly career defining season:

The bare handed catch seen round the world. Hand to Gawd this catch was THE ONLY THING that was talked about for months. Like randomly in the middle of a fifth grade math lesson some kid would raise his hand and be like “I can’t believe Kevin Mitchell caught that ball with HIS BARE HAND” and then just stare blankly off into space pondering the existence of the universe.

And then Mitchell started bashing homers all season long finishing the year with a career best 47 HR and 125 RBI, leading the league in both as well as posting a nifty .291 BA. That’s a pretty good year at the plate for a guy who’s previous career highs were 22 HR and 80 RBI.

And the San Francisco Giants were actually good too which was seemed just as implausible.

The Giants made the NL playoffs to face the another equally historic but usually futile franchise, the Chicago Cubs.

Though overshadowed by the performance of Will Clark in the NLCS, Mitchell continued his career year into the post season hitting .353 and blasting 2 ding dongs against the Cubbies with 7 RsBI.

The Giants won the Pennant!

Then reality and an earthquake hit 1989, live on TV at the start of Game 3, the first World Series game to be played at Candlestick Park in 27 years.

Game 3 was postponed for ten days but it hardly made a difference as the Oakland A’s and the Bash Bros rolled to a 4 game sweep.

Kevin Mitchell followed up his MVP season with an above average 1990 campaign but only lasted two more seasons in San Francisco. He bounced around the Majors for a few more years before retiring in 1998, never again reaching the heights of his 1989 peak. 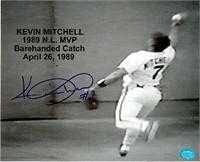