The Hi-Topper Lost Legends Series highlights players who all had one thing in common – style by the mile. They may not have been the best but they sure looked good gettin’ it done.

Mr. Incaviglia was the Master of the 3 M’s: 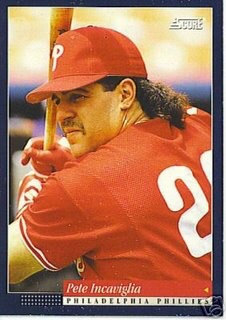 Pete Incaviglia is the Hank Aaron, the Babe Ruth, the Roger Maris and the Barry Bonds of NCAA Baseball. He holds the All-Time Career and Single Season Home Run records with 100 Dongers in only 3 season (213 games – so yeah he basically rounded the bases every other game of his entire college career) and 48 in his Junior year alone.

Boss Move 🚨- Upon being drafted by the Montreal Expos Incaviglia refused to spend a single day in the Minor Leagues. He was traded to the Texas Rangers who sent him straight to the Bigs where he did what Kings do and bashed 30 Dongs and led the league in strikeouts.

The high water mark of Pete’s career was his trade to Philadelphia where he helped the 1993 Phillies reach the World Series.

Pete Incaviglia, Hi-Top salutes you for your muscles and your mullet and your mustache but mostly for your moonshot Ding Dongs and the memories you gave us all.