In addition to buying Christmas presents, I’m buying (and selling) some Christmas songs this year.

“All I Want for Christmas is You” – Mariah Carey

Another classic, from another member of diva royalty. BTW, if you don’t know anything about Darlene Love, you need to check out “20 Feet From Stardom”, an incredible documentary focusing on the life and careers of backup singers. You will love it… Patrick Cunnion gives you a moneyback guarantee.

“Have Yourself a Merry Little Christmas”

An all-time classic. This song is the embodiment of the feeling of Christmas Eve, kids are in bed, presents done, and you finally can relax by the Christmas tree and enjoying a cocktail. There’s literally a list of the Top 50 performances of this song, many chose Judy Garland, I’m going with old Blue Eyes.

McCartney. Bono. Spandau Ballet. Sting. Phil Collins. Johnnie Fingers of the Boomtown Rats. Bowie. Maybe the other guy from Wham… this 1984 hit has a more fascinating roster than the 2010-11 OKC Thunder.

Truth be told, the song is weak. But I used to work for a certain Business owner in the Greater Lowell area who would treat us every holiday season to his rendition, entitled “Kelly Wears Nice Bras”. The song was about someone who worked there, but I will not give you her name…though the title may clue you in. I cannot confirm whether the song is factual, but I can confirm this was clearly before the #metoo era. Now, 15+ years later, I can’t sing it any other way, and so does my family. And Tom and Sarah. And now, hopefully you. Kell-y Wears Nice Bras! 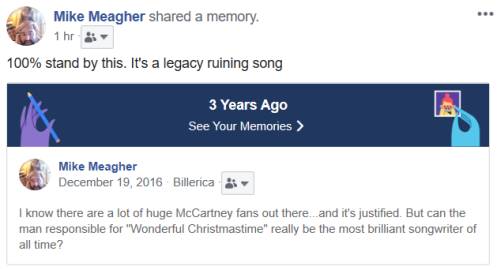 “So this is Christmas”…wow, that’s some deep shit, John. Everything about this is obnoxious. First line. The title. Yoko. And don’t even get be going on whatever the fuck the Plastic Ono Band is?! It’s only slightly less terrible than McCartney’s Christmas tune and This is the worst thing that’s ever happened to John Lennon.

Absolutely atrocious piece of music here. And I say this as someone who generally appreciates unnecessary use of a horn section in a song.

“It’s the Most Wonderful Time of the Year”

It’s been done a million times, by a million different artists, and I don’t like any of them. Overrated schlock.