I’m going full-on Patriots reporter today and doing my assessment of the 53 Man. All position groups rated on a 4- 🏈 scale.

Brady showed signs of slowing down (GASP!) last year…face it, you know it’s true. He wasn’t great. But it almost doesn’t matter. The roster is built around him, and come playoff time there isn’t anyone in his class. Extra points for dumping the unnecessary Hoyer, and for the progress Stidham seems to be making 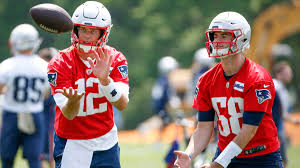 One of the best position groups on the team, despite the inclusion of Bolden. Each of these guys is versatile, and they’ll all have roles. I’m also giving up my crusade against Bolden…for some reason Bill thinks he’s integral, though I’ll never understand it. Just keep him on ST, please- every time he gets an offensive rep a baby kangaroo is murdered.

The Patriots Media Cartel special. This group sucked in June. Then, Jakobi Meyers was “intriguing”, Gunner was a “Bill type of guy” and based on a meaningless showing against some dude now working at Popeye’s, Demaryious Thomas “still has something in the tank”. And now, I’m supposed to believe this group is a strength!?!? Puh-lease.

I think ultimately, the WR’s will be fine. Edelman is what he is, he’s a great 3rd down weapon and more importantly, Brady loves throwing to him. Gordon has talent, but how long is he going to be around? Thomas… I need more than him dominating an XFL wannabe in Preseason game 4. I’m also on record with saying Meyers and Gunner are strictly fanboy/media creations; Training Camp heroes. If between the two of them they can field punts without turning it over, and catch 30 balls combined, that would FAR outperform my expectations. Also, Harry is going to be a great pro…whenever he gets healthy.

Like an asshole giving a Yelp review I’ll start by saying “I wish I could give less than 1 star”. This group is hot garbage. Watson was actually retired, is about 50 years old, is suspended 4 games, and also happens to be the best in this group by 1,000,000%. ‘Nuff Said. Where have all the Dwayne Allen’s gone?

Mason is one of the best in the league. Wynn is one to watch. The rest…it doesn’t really matter. I don’t typically believe in Patriots mystique or any of that bull

shit, but I’ve seen enough subpar groups turn into good-to-great offensive lines under Scarnecchia, that I’m not doubting anything. Even the fact that 3 of these guys just got here last Wednesday.

Meh. Michael Bennett can play, he graded out really well last season. I think Winovich has potential as an energy/ pass rush type of guy, but is he actually good, or is it just the hair? The difference in this group will be if Wise can finally turn himself into a real player. He’s flashed at times, but was on the bubble this weekend.

Apparently Guy has been good, though I’ve never really noticed him. Shelton and Butler are good, solid, rotational guys up front. But I’m really interested in Cowart. Last year, Bennygloves called that JC Jackson was a player from Day 1. This year, I’m planting my flag on Byron Cowart. I’m betting by this time next year, he’s considered the best player in the Pats’ front 7. Did you know that he was one of the most highly recruited guys coming out of HS…of course you did, because a thousand people wrote about it over the summer.

I like this group, as long as Hightower is on the field late in the season and the playoff run. Van Noy will keep doing Van Noy stuff. Roberts in a run only guy, but effective at it. Collins showed some burst in pre-season games, and should be an effective role player. He’ll need to be able to show he can cover though. And I’m most excited about the upside of Bentley. LB was a weak spot for several years, but I have it as turning around.

I’ll just say, I’m fully bought in on Benny’s Binky, JC Jackson. I don’t know if he lines up in the slot, or opposite Gilmore, I just know he should be on the field a majority of the time. LOVE JoeJuan Williams’ upside too. He’s huge for a corner, so if he can stay with WR’s, he could be something special. If not, he may be a candidate to be a factor at Safety.

I don’t love this group based on age and talent, but the staff he been able to put these guys in positions to protect from their weaknesses. Like, despite edging out Eugene atop my Chung Power Rankings, I don’t think Patrick Chung is actually a very good player, but he’s effective for what he’s asked to do here. I don’t think this group will end up hurting the team, but there isn’t much depth, and they are getting flat out OLD. Ebner is really just a specialist.

Kickers were 31-of-31 on FG at Mercedes-Benz Stadium this season prior to Stephen Gostkowski's miss (via @thecheckdown) pic.twitter.com/NwVFUum2v8

Gostkowski worries me, but as I’ve noted, there aren’t any good kickers in the league anyway. Bailey seems like he could be a great punter. BTW, what happened to Long Snappers that did other shit? My thought is, they have a dedicated spot now just because of limited practice time, they don’t want to take a 2nd string LB away from defensive reps just to snap all day on some side field. But wouldn’t it be a great example of roster maximization if your LS served another purpose?

*IR- with designation to return