I took a short hiatus from the HTTA world, but today was the day I decided to return. As luck should have it, the planets aligned and the universe has delivered something so profoundly stupid, that I feel compelled to shine a light on it.

I should say, I am NOT an Olympics guy. Not at all. Of the estimated 6,000 hours of coverage, I would say about 7 hours should actually be aired on network television. Far too much forced tradition and fake excitement for athletes competing in sports nobody cares about for 3 years, 11 months at a time. (when was the last swim meet you watched?) But, at least most of them can actually be considered sports and require elite athleticism.

This “Breakdancing” BS takes it to a new low. The IOC messed around with Ballroom Dancing for a while, but finally realized, for a million reasons, it doesn’t belong. Now, they are going to move to a far less technical version of dancing???

It was actually cool/ relevant in the 80’s. There were dudes named Crazy Legs, Frosty Freeze, and Mr. Wiggles, and they were part of dance crews. And if someone wanted to make it an Olympic sport in 1986…well, it still wouldn’t have been a sport, but at least it had some juice. You could make a case. 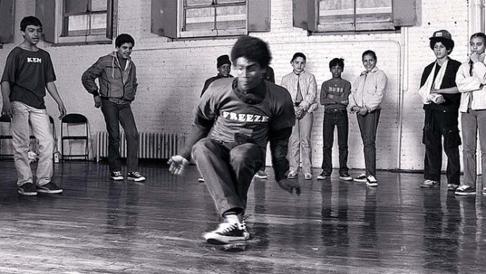 To bring it into the Olympics now? Completely ridiculous. You’re going to have some dude who taught himself how to spin on his head on cardboard on some street corner, being handed the same gold medal as the winner of the freaking DECATHALON?!?! Utter lunacy.

Remember when Geena Davis was almost an “Olympian” about 18 months after she first attempted archery? That was a complete disgrace. THIS IS EVEN WORSE.

If you’re gonna come at me with “It’s hard to do, and takes practice” Well, so does photography. And I don’t see Ansel Fucking Adams with any Olympic medals, do you?

I want to make it clear…this is an anti-Olympics rant…not an anti- Breaking rant. (Attn: IOC, calling it “breakdancing” is just plain lame). I got nuthin but love for breaking. The B-girls/ B-boys can flat out mooove. And as far as dancing goes, breaking easily have the most swag. It’s street. There’s mad respect, but no politeness. It even helped quell gang violence. Just doesn’t belong in the Olympics.

I want fewer Olympic Events, not more. And they should be actual sports…or, at the very least, defensible as a sport.

Dancing competitions? Keep em on reality shows, and on those weird fringy channels you can only find in the Non-HD section, or in mid-range hotel chains.