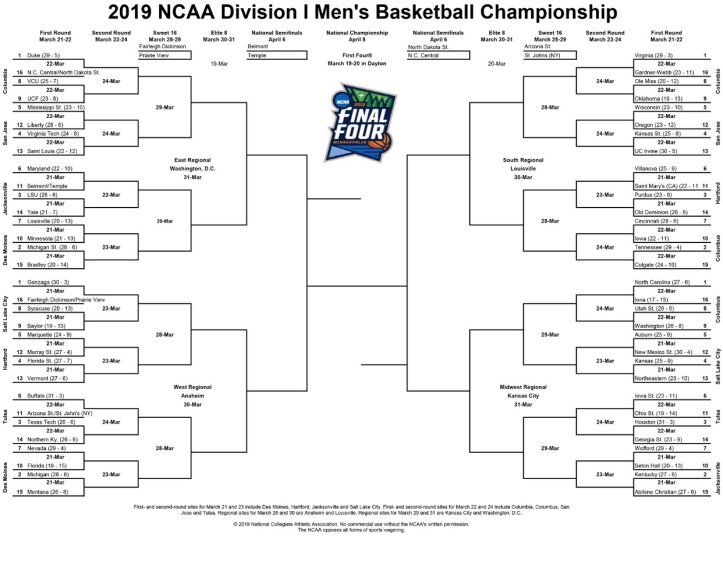 The only thing you can confidently predict about the Men’s NCAA Tournament is that you know nothing Jon Snow. As in everyone’s bracket will be busted. All the Top Teams are led by freshman and well freshman ain’t exactly who you want to depend on in important moments. And the less talented Mid Major teams are full of veterans who’ve been playing together for years. In short as we learned last year, in contemporary college basketball almost anyone can win or lose. There are virtually no gimmies. Proceed with caution.

The South and the Midwest are the two easiest regions BY FAR. It would be shocking to not see 1 v 2 Finals in both regions.

I don’t see how anyone can ever trust Virginia. I think they make it to the Elite Eight But Tennessee will win.

Upset Picks – New Mexico St. over Kansas in Round 2

Kentucky should make it to the Elite Eight but a Second Round loss to Wofford will be a VERY popular upset pick.

Gonzaga v Syracuse in Round Two will be a slug fest. I haven’t been overly impressed by the Zags. Their best player Rui Hachimura will be swarmed by the Cuse zone. If the Zags don’t hit threes they will lose to the Orange.

Upset Picks – The East will be the disaster bracket. You will have soooo many red lines you’ll think about taking your bracket to the ER. Liberty, Yale and Belmont could all conceivably make Sweet 16 runs. Bradley will give Michigan St a real scare. If Duke playing a double digit seeded opponent in the Elite Eight isn’t a prop bet already it should be and I’d throw a twenty spot on that in a hear beat.

It will be an all ACC matchup in the Championship game. This will be the fourth meeting between the Tobacco Road neighbors. The Tar Heels won two regular season Zion-less games and had a last second chance to win a third in the ACC Tournament Finals.

Presumably the Dookies will have a full strength team in the Championship matchup and Zion was built for the big stage. I predict a monster Final Four campaign by Zion who will put up a 40-20 game to led the Blue Devils to victory.