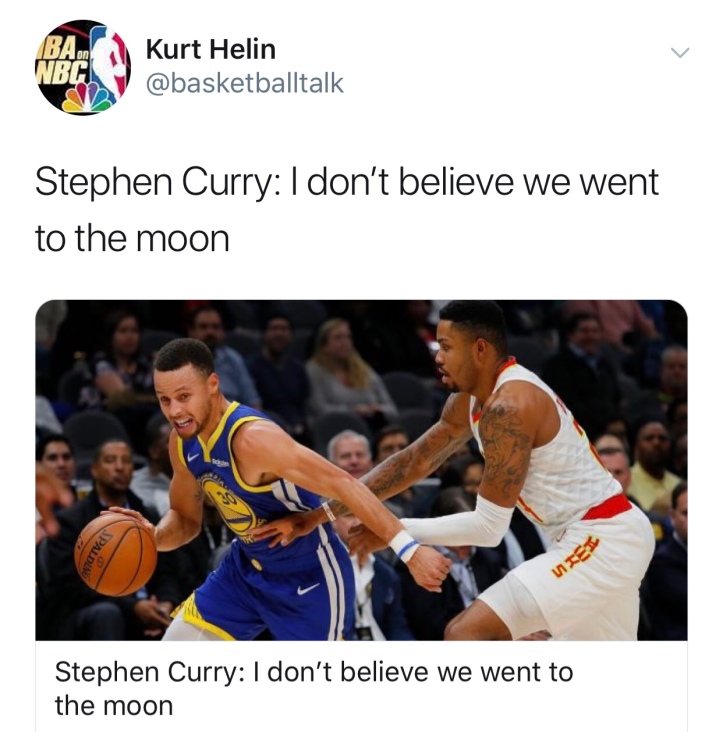 Curry was on a podcast because of course this type of thing only happens on podcasts and declared his non-belief in the Moon Landing. For what it’s worth podcast hosts Kent Bazemore and Vince Carter all seconded Curry’s disbelief. But Steph is the one getting the headlines so here we are again, back in the NBA Conspiracy Theory News Cycle.

Now to be clear on the hierarchy of Conspiracy Theories, the Moon Landing has to be like first day stuff. We’re talking Beginner Level here. It’s not like Curry is expounding on the Mandela Effect or the fact that the Holy Roman Empire faked 300 years of history and we actually live in the Year 1718 right now.

We here at Hi-Top HQ aren’t full on Conspiracy Theorists but like all things we do dabble. And the faked Moon Landing is a favorite. Of all the crazy theories bouncing around the Internet, the fact that we were able to land on the Moon in 1969 is definitely worth more than a cursory look. So…

Hi-Top Top 5 – Reasons the Moon Landing Could be Fake

Kennedy promised Americans that we’d get to the Moon by the end of the 60s and if there was one thing the Government couldn’t do in 1969 was miss out on some patriotic galvanizing shit like delivering on a promise JFK made. Which leads to #4…

The United States (or more accurately the US Government) in 1969 was in a bad way. The height of Vietnam dissent. The hippies were everywhere driving “normal” Americans nuts. In short the Counter Culture was winning. And Nixon wasn’t having it. And we know Nixon had no scruples at all. If anyone would give the go ahead to a mass hoax on the American public it’d be Nixon.

Not enough time or energy to go into this one fully but does that photo look real to you??? 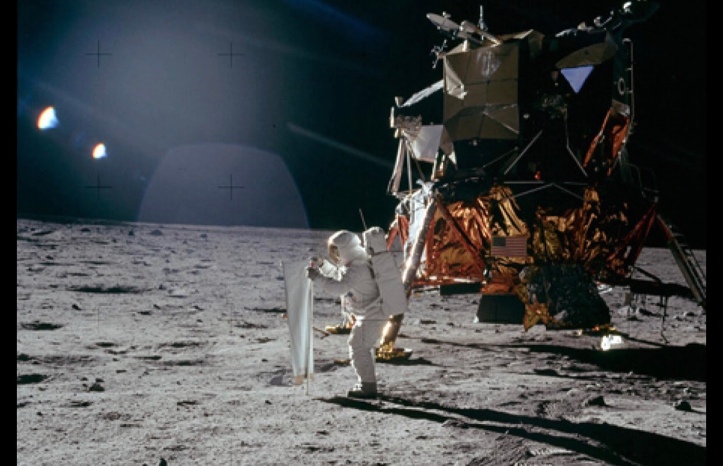 They didn’t even bother to hide the lights.

Just explain to the Lil’ Dogg how we are landing humans on the moon and yet back down on Earth everyone is watching on Black & White TV sets the size of refrigerators???? The technology in 1969 on EVERYTHING else is from the dark ages. Cars are the size of boats. Computers fill up entire rooms. And yet 3 dudes are going to fly to and successfully land on the Moon and then live up there for a week AND be able to transmit live TV of the whole thing back to Earth. In 1969. While everyone else is still making rotary phone calls to switch board operators. This is what doesn’t add up. The technology to make a Moon Landing happen in 1969 just doesn’t seem feasible at the time.

Facts is facts and the fact is Steph Curry is right on the mark with this one folks. Maybe someday we’ll get there but we didn’t back in the Summer of ’69.