With the finalists for MLB Awards being announced, the AL MVP finalists seem to have turned some heads in these parts.

Before dealing with the elephant in the room, let’s look at what my analysis of the exit polling is telling me:

Betts is going to win.

First, he’s the best candidate. Ramirez faltered in the end. Trout missed at least a month.

Betts went 30/30, hit almost .350- winning a batting title- and is the best OF defender in baseball…maybe the best at any position.

And Martinez not being a finalist tells me that voters didn’t have trouble splitting up their “credit” for the Sox’ success between Betts and Martinez.

The BBWAA has gotten smarter about All-Around Players

There is more to MVP than HR and RBI’s. There is more than just offense. Defense matters. Base running matters. You can impact the game in different ways, and the best all-around players should be regarded more highly for the award.

These finalists are all great offensively, and all ELITE defenders.

The argument “How valuable can he be if his team only won __ games?” is really, really dumb. No one guy can make a team great. Not now, not ever in history. So one guy, Trout- who happens to be the best player of the last 50 years- should definitely not be punished for having a shitty manager and pitching staff.

Now, the hot topic around these parts is that JD Martinez is not a finalist. Many fans, and some who cover the sport, have gone as far as to call it “criminal”. 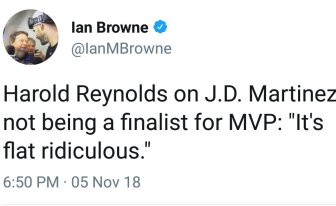 Full disclosure, I’d have Martinez 3rd, above Ramirez. But I also don’t think it’s ludicrous that he was left off.

JD was a major key to the Sox run…he strengthened the lineup to the point where they were the best offense in baseball. He was incredibly consistent at the plate and delivered big hits all season. He was exactly what this team needed, and his OFFENSE is MVP- worthy.

But…he played only 57 games in the field, and he was average (to be extremely generous) in those games. He no great shakes on the base paths either.

MVP is about more than offense. Guys who do more things well, are more valuable to a team.

JD is right there…he’s a deserving candidate, but to call it “criminal” that he’s not top 3, I think is missing the mark.

You want to tell me JD should be above Ramirez…fine. Not going to argue it. Ramirez took a bit of a nosedive in August and Sept, and while I’m a stat guy, I allow for a little “when the games matter most” in my analysis. But I’m not calling it an injustice that JD was 4th (presumably).

As Sox fans…”our” guy is still going to win. We also know that Martinez was a huge piece of the puzzle. And, the Sox won the World Series. Maybe, let’s chill out on the “disrespect” card.

Also, David Ortiz never won an MVP, only had one top 3 finish, so let’s keep everything in perspective.