Dunkin’ Donuts is dropping “Donuts” from their name… but is also still going to sell doughnuts.

Just call it Dunkin'. Starting in January, Dunkin' Donuts will drop the "Donuts" from ads, packages and signage at new and remodeled stores, as well as its social media accounts https://t.co/nNtd3J8vuo pic.twitter.com/z3GinQNKAK

Ok, this is a whole new level of stupid.

Now, your name is just Dunkin’? Dunkin’ is a VERB!!!! It requires a subject, or at least an object. Who is Dunkin’ something, or what or whom is being dunked? Forget the fact that nobody in the last 45 years has actually dunked a doughnut…it’s what you went with at the beginning…now you’re stuck with it. You’re a brand, everyone knows your name.

And what is the purpose of this? To sound more healthy, or something? Is there a negative connotation with “Donuts”. Lemme learn you something DD…ZERO people are going to forget that they’ve eaten your shitty donuts for their entire lives. Granola crunchers aren’t going to suddenly flock there looking for healthy alternatives.

On top of all this, it’s not even clever. You’re just joining the obnoxious trend of nonsensically shortened jargon and company names…that DRIVES LE CAP CRAZY!!!!! Brevity does not necessarily equal cool. It isn’t creative.

OH, that reminds me…speaking of “CREATIVE”. “Creative” is an adjective. No matter how many times someone refers to themselves as a “creative”, or a department of a company as “the creative”…it’s NOT A REAL THING. Creative what(?), you pretentious assholes?!?!?! Just say Creative Department!!! Stop trying to sound important!!!!!!!!

Now listen, I’m not big on Dunkin’ Donuts, and their big corporate culture, in the first place. I make my own GD coffee… I even make my own Cold Brew….NO BIG DEAL.

If I do want to go out and treat myself, I’m heading over to Cumby’s. See how that works Dunkin’??? I can call them Cumby’s, but they don’t go changing their freakin’ name over it!!!

99 cent coffee…how can you go wrong with that, huh???? And they haven’t raised the price in TEN YEARS!!! 10 years…sometimes I go back to Dunkin’ Donuts later in the same day and the price goes up. Who do these bozos think they are?!?!

Join me, Le Cap, and the rest of HTTA, in endorsing CUMBERLAND FARMS as THE spot for coffee. 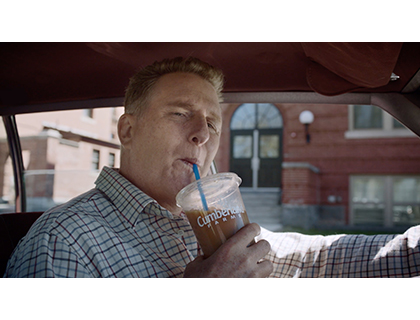