The US team is LOADED. All 12 team members are among the top 25 in the world (6 of the top 10). DeChambeau and Thomas led the PGA tour in wins this year, Koepka won two majors, and Tiger obviously won last weekend. The US has fewer Cup rookies than Europe, and the ones they do have are among the hottest players on the planet- DeChambeau, Finau and Thomas. Oh yeah, still haven’t mentioned the studs of the ’16 Cup at Hazeltine, Jordan Speith, and of course…Patrick Reed.

So, obviously, this is going to be a romp. The US should roll, take it down by at least the same margin (17-11) they did 2 years ago. No need for any analysis, right???

NOT SO FAST MY FRIEND! There is more to this week than just a resume-measuring contest.

Here are some tidbits of info, some storylines, and some concerns heading into this weekend’s

The European team on the other hand, has some vets who are used to success in the event. Ian Poulter (12-4-2) is an ALL TIME great Ryder Cup player, and I’d throw his late-season struggles out the window…same goes with Sergio (19-11-7).

First off…HOME FIELD. The hosting team Captain has a tremendous amount of say over the course’s set up. Rough, speed on the greens, pin placements…this was all being thought of as Thomas Bjorn built his squad, and when the players show up Friday morning, the course will be set up to best suit the Europeans.

The course is also not a big drivers’ course. There are a lot of iron-off-the-tee holes. Now, we’re talking about the best golfers in the world, this isn’t a problem, but it does mitigate a lot of the advantage of the US team, as they have more huge hitters on their squad.

Both sides have some potential key contributors who haven’t been on top of their game as of late.

For the Euros: Garcia, Poulter, and Henrik Stenson have all had disappointing seasons, but are all key veterans on the squad. For a team with 5 first-timers, the experience and past successes of this trio is as important a factor as any. Stenson has had injuries, so if he doesn’t look right on Friday, that’s a bad sign. Poulter and Garcia are just headcases, but don’t bet against them feeding off the energy of the event and the home crowd.

For all of the US players who are hot right now, there are some red flags to me. Jordan Spieth all of a sudden can’t putt. Bubba Watson finished T-5 at the Maters, but only two top 10’s since then, and Patrick Reed similarly has struggled, with one top 10 (5th at US Open) since his Masters victory. I’m not too worried about the latter, but the two former (speaking of headcases), I’m not as confident they’ll deliver this weekend. 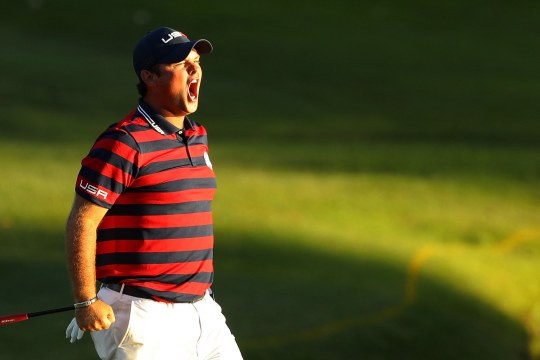 I think, ultimately, it could come down to the young guns.

The Euro team has 5 first-timers, as I mentioned, and of them, I only really have confidence in (HTTA Favorite) Tommy “Mac” Fleetwood. Beyond him, and sort of Jon Rahm, these aren’t guys that a lot of people know about. On one hand, being on a “home” course could be good for rookies, but on the other hand, trying to avenge a loss on European soil could be a lot of added pressure.

The US team has 3 rookies. As I see it, I don’t think they’ll be asked to do a lot of heavy lifting, but that doesn’t mean they won’t play a role. I don’t see Phil playing too much this weekend, likely the same for Bubba, so Captain Furyk might be looking for DeChambeau or Finau in particular, to play their way into more matches.

Let’s face it…the European team is ALWAYS more fun. The US did have some great chemistry in 2016, thanks to Spieth and Reed (also unbelievably and shockingly Asst Captain Tiger Woods was credited with a lot of this), but through the years the Euros feed off each other. They play hard, and when they’re done they party harder. It’s less like 12 individual corporations playing together, and more of a team.  The US will need to carry over the 2016 vibe if they want any chance of being as fun as this crew.