This is Where I am on Josh Gordon

I have been tossing this back and forth this week, trying to figure out where I ultimately land on the Josh Gordon deal, and here’s where I’m at. I’m a bit stuck in the middle. 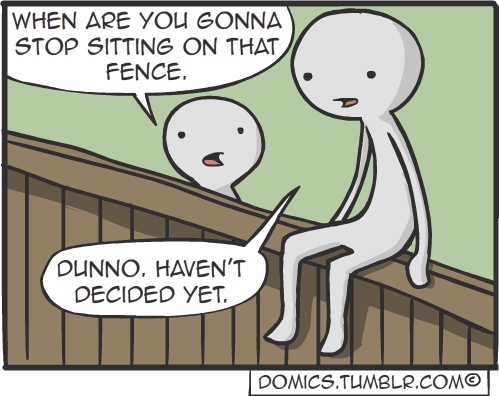 I feel like the next generation grad from the Glenn Ordway Institute of Fence-Sitting.

Look, I don’t think this works, no matter what your definition of “works” is. 8 games as a contributor? 40-plus catches? 4 TD’s? I’m burying the under on all of them. And I think any rational and objective person would have to agree.

This guy has played 11 games in the last 4-plus seasons. Even his one good year, he only played 14 games. And this isn’t all in the past…he just almost got cut BY THE BROWNS, under some very suspicious circumstances. I don’t this will go well at all, and I think it’s better than 50-50 it blows up soon.

But unlike fellow (usual) fence-sitter Mike Felger, I can’t get myself riled up about the deal. He’s gone against his instincts instilled in him by his (Big O)bi-Wan  this time, and has taken an actual stand. He said he hates the deal. I just can’t see the rationale there.

Give up a (probably late) 5th, they secured a (probably early) 7th coming back, and they got a guy with incredible talent who makes basically no money. It’s a lottery ticket, make no mistake, but there really isn’t a ton of risk involved. You’re moving down like 35-40 spots on Day 3 of the draft, and you spent like 700K…worth the price to me.

But where I get off the Gordon train is when I hear morons claiming New England, or Belichick, or Brady will somehow be a magical fix for this guy. Or my favorite “Have him hang around with Matthew Slater”*

*shout out to T&R on that gem (if you didn’t hear them say that, tune in any other morning for the next 3 years to hear them repeat it, it will be just after the Jagr impressions, and just before Johnny Gomes talk)

Gordon has issues. Serious ones. I hope he can overcome them…and I hope he makes a difference on the field. I just don’t think there is any chance it happens. But  when it doesn’t…I really won’t care.