The Pats are squaring off with the Jags in lovely Jax on Sunday, in a rematch of the AFC Championship game…an instant classic. The game will be a challenge for NE, looking to get to 2-0, as the Jaguars defense will give Brady all he can handle.

Anchoring the defensive unit, in many ways, is cornerback Jalen Ramsey.

If you haven’t been caught up on this guy’s offseason, it’s been an eventful one. He’s always been outspoken- and he is an absolute STUD, so why shouldn’t he be- but he took it next level in an August interview with GQ. Ramsey broke down the league’s QB’s.

This is some great stuff. Just tremendous.

I absolutely love the next level trolling this guy is up to with all of these rankings.  Brady and Rodgers getting “Doesn’t Suck” as a label is priceless.

He even kinda jabs at his own guy, Bortles, “Blake do what he gotta do”, lest you question his objectivity.

When I first saw this last month, I wanted to blog it, but it got plenty of run. Everyone picked it up, talked about it, dissected it, smacked it up flipped, rubbed it down…. so I held off. But all this did was make me like this guy more.

I already think he’s among the 2 or 3 best defensive backs in football, even just two seasons out of Florida State. The cornerback position demands a certain attitude, a swagger, and this guy clearly has it. He ain’t afraid to tell you he’s the man…and he backs it up on the field. And my man Jalen wasn’t done with the QB’s…he recently took aim at Tight End/ Frat Boy, New England’s own Rob Gronkowski in an interview last week: 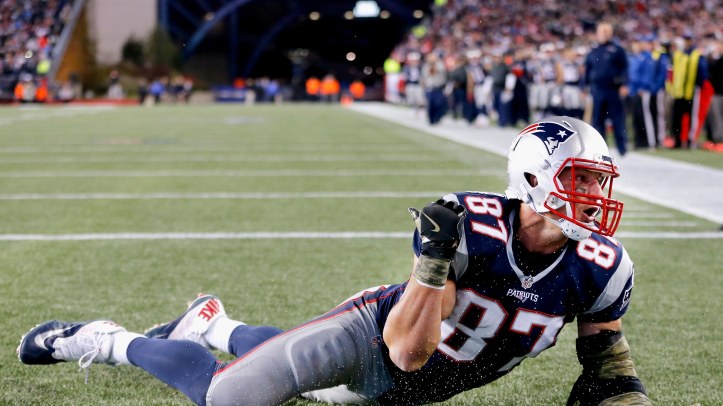 Now, I know some reading this are probably triggered right now…how dare anyone call into question the great Gronkowski….he’s the best tight end of all time, one of the best players in football, and the numbers speak for themselves. This clown is talking out his ass. Right???

Ramsey said he had some members of the Jaguars’ staff pull analytics before the AFC Championship Game last year, and he realized that Gronkowski struggles more when squaring off against opposing cornerbacks rather than linebackers or safeties. As Kimes notes, his catch rate drops from 71 percent to 56 percent when he lines up on the perimeter instead of in the slot or on the line of scrimmage.

Au contraire…my man had Jaguars staffers crunch numbers for him to use in his trash talk.

DROPPING HOT TAKES all over the place, baiting yahoos to come back at ya…THEN having carefully selected and subjective statistical analysis to back yo your argument! BOOM ROASTED.

THAT my friends, is the way to Le Cap’s heart.

I love this guy so much, and how much he has clearly elevated the art of trash talk,  that I’mma go ahead and ignore how little context “catch rate” provides to back up his argument, and I’ll just celebrate the effort and style of this treasure.

By the way New England fans…I think the boys will struggle in this one. If they win – BIG “IF” to me- it’s going to take a 4th quarter comeback. I could easily see them dropping it, though. Jags 24-19 is my prediction.