If you know me- or if you’re a frequent Hi-Top reader- you know my interests and hot takes extend far beyond the world of sports. You also know that, contrary to the viewing habits and interests of most people in my demographic, I love me some network TV dramas. And sitting high a top the list is none other than Hawaii Five-0.

This show has everything you need for your Friday night viewing pleasure. Overly convoluted over-arching story lines that never see resolution. Every actor and crew member who ever did an episode of Lost. A borderline superhero main character in Five-0 Commander Steve McGarrett. And, the official patron saint of every 1990’s ensemble heist movie, and master of intentional- un-intentional comedy…Scotty Caan.

This guy is a treat to watch every week- yeah, I might be the only guy on the planet who has watched every single Hawaii Five-0 episode….no big deal. Caan really pulls off the likeable, but dick-y sidekick to Commander McGarrett, and the two of them carry the show…which has been renewed for another season.

Almost immediately when watching this show, I developed the opinion that Caan’s shirts were unnecessarily tight-fitting. You be the judge:

I get it…the guy’s got a good bod, but c’mon, Danno. I know you were a cop back in Jersey, and family circumstances led you to the Big Island, but c’mon man. It’s been 10 years. You’re in Hawaii. Relax a little. Clearly the boss doesn’t hold you to a strict dress code…he’s wearing t-shirts.

This makes no sense for the character or plot of the show, so it always baffled me. My official theory/H50 hot take was: Scott Caan insists his character wear tight button down shirts.

Now, getting a solid answer on this, for most mere mortals, would be impossible. But, when you’re the #magnate, the CEO of a Multi-dollar Internet Empire, you get to meet the right people.

I was able to speak (through a friend) this weekend with a big-wig on the set of H50- a person with unique and direct knowledge of the costume department. And this person had some interesting things to say:

Below is a string between my friend (as dictated by me) and our source: 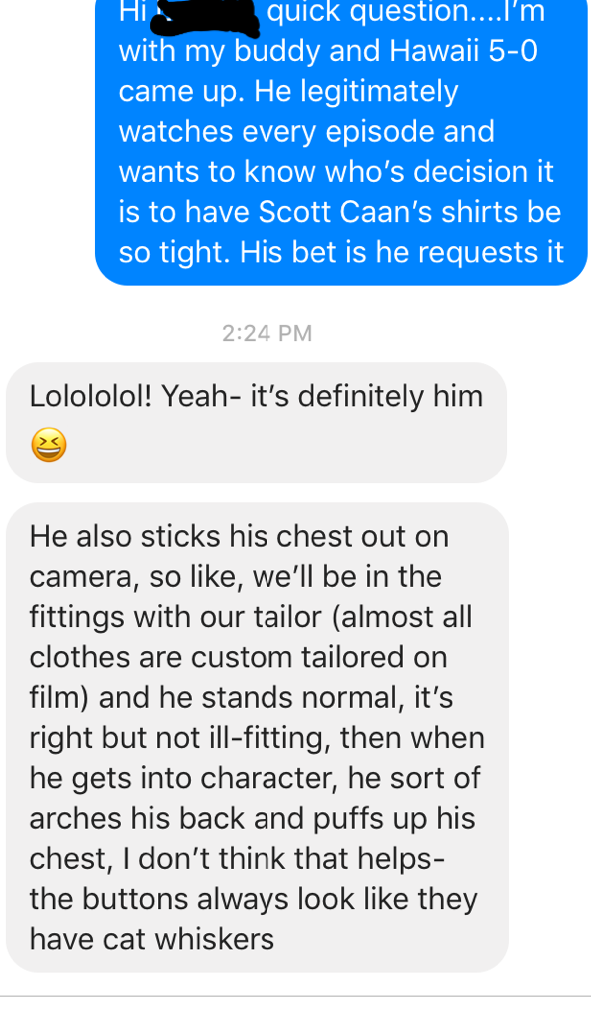 Some people throw out Hot Takes for the sake of throwing them out there. They’re trying to get some cheap buzz on the topic of the day.

That’s the difference between all the phonies out there and me- I don’t give Hot takes…I live Hot Takes.

They don’t even have to be about something that anyone cares about…I just can’t help the takes. It’s like…it’s an inborn skill…I couldn’t stop it if I tried.

Combine the Hot Takes, with tremendous instincts and insight….and you know what you got??? LE CAPITAINE.