As the Golf World is gathered for “golf’s ultimate challenge” at Shinnecock- a course named for an old Indian Chief with a Shiny…well, you can figure that out- there is but one thing on everyone’s mind.

Well, two things. The first is, how can I get close to Paulina Gretzky. And the second, and most important, who is Le Cap picking to win.

Well, never fear, I’m going to let you know. If you’re going to spread some sheckles around this weekend…these are the guys to do it on.

As Lil’ Dogg pointed out, Shinnecock is definitely going to punish the inaccurate, due to the wind on the course and the punishing rough. With this and other factors in mind, I’ve reviewed the field and have some real insights for you entering the US Open.

odds according to Oddshark (as of Wed Morning)

Dustin Johnson (8-1): Golf is the most cerebral sport…and it’s not close. Many- like Tiger Woods and Bryson DeChambeau- seem to excel with a more intellectual approach to the game. Others…well, others just go out and rip it. Dustin is one of those. It’s both served, and cost him, throughout his career…namely his US Open collapse at Chambers Bay. Right now he is playing well, and if he can limit the errors, he’s a deserving favorite.

Rory McIlroy (14-1): Sure, after a nice start to 2018, he’s back to his whiny ways…which doesn’t bode well for the challenge of a US Open. But he is, IMHO, still the most talented player on the planet, and this course could be set up well for him.

Jason Day (16-1): It’s been a weird couple of years for Day. He’s been #1 in the world, and also has been an afterthought. But he’s a guy who’s got 12 Tour victories, a major win (among 8 top 5’s), and hits his irons higher than club manufacturers believed was within the limits of mortal man. If he can keep the vertigo under check…watch out.

Bryson DeChambeau (40-1): The dude has only played in 7 majors (2 top 25’s), plays with one-length irons which give him a weird posture at address, and is probably the least captivating player this side of Justin Thomas. But…he did win at the Memorial 2 weeks ago, and doesn’t seem like someone who is too phased by much of anything.

Hideki Matsuyama (28-1): I watch a bunch of golf, and one of my top observations of the past 4 or 5 years is, Matsuyama appears on the leaderboard as much as anyone. I have no way of knowing if this is true, and he doesn’t have the most spectacular record in majors (22 Majors, 4 Top 5’s), but I’m going to continue to pick him every time out.

Tommy Fleetwood (40-1): Beyond the obvious fact that he should’ve been named “Mac”, Fleetwood is a smooth player who has won 3 times on the European tour since the start of 2017, and placed 4th in the US Open Last year.

I know he’s the same odds as DeChambeau, but I feel like next to nobody knows who this guy is. I bet you couldn’t even pick him out of a lineup. Let’s try, which one is Tommy: 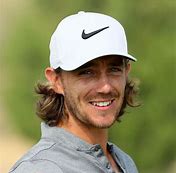 Scroll down for answer…..