Meet Matt Mamba and the most ridiculous trick shot video ever

What if I told two years ago a random chunky white dude made a crazy ass trick shot video in a vain attempt to meet Kobe Bryant.

Here's my best trick shots I made to try to get Kobe to tweet me! #TopNeighborhoodPlay #KobeTweetMatt pic.twitter.com/rygmduH88V

God bless the internet. You click on one random hashtag and end up discovering the greatest shooter of basketball-related shots of All-Time!!!!!!

The levels of genius here are just too deep to ignore so let’s break it down shall we.

Matty Mamba LOVES Kobe Bryant, that much is obvious. Why? Who’s to say? Kobe has his lovers (both willing and unwilling) and his many haters but Kobe being someone’s “favorite” player is certainly not unheard of. So Matty Mamba wants the Black Mamba to tweet at him.

Instead of doing these fairly obvious things Matty instead enters a random video contest for a chain restaurant and proceeds to compile the most insane basketball trick shot video ever filmed.

This video is perfect. This video is everything. I love this video as much as it’s humanly possible to love a video. Matty Mamba is the love child of Pistol Pete Maravich and Chris Farley.

Which shot is your favorite?

Mine is the shovel shot. No wait. The Fire Ball. No no no. The casual scoop in the snow. No! Out the window.

Actually the correct answers is all of them. They are all amazing.

Matty Mamba is amazing. The pep talks before the shots. The celebrations. The pure joy from nailing a shot off a roof. The fact that his basketball hoop is on fire and he seems to neither care nor have a plan on how to put out the fire.

Thank you Matty Mamba. You may not have gotten Kobe Bryant to tweet you but instead you have done so so so much more. You aspired to greatness and you achieved immortality.

There’s the Black Mamba. The Red Mamba. The White Mamba. But for us the only Mamba is Matty Mamba.

The Legend himself reached out to Hi-Top and to no one’s surprise he did in fact get a tweet from Kobe Bryant: 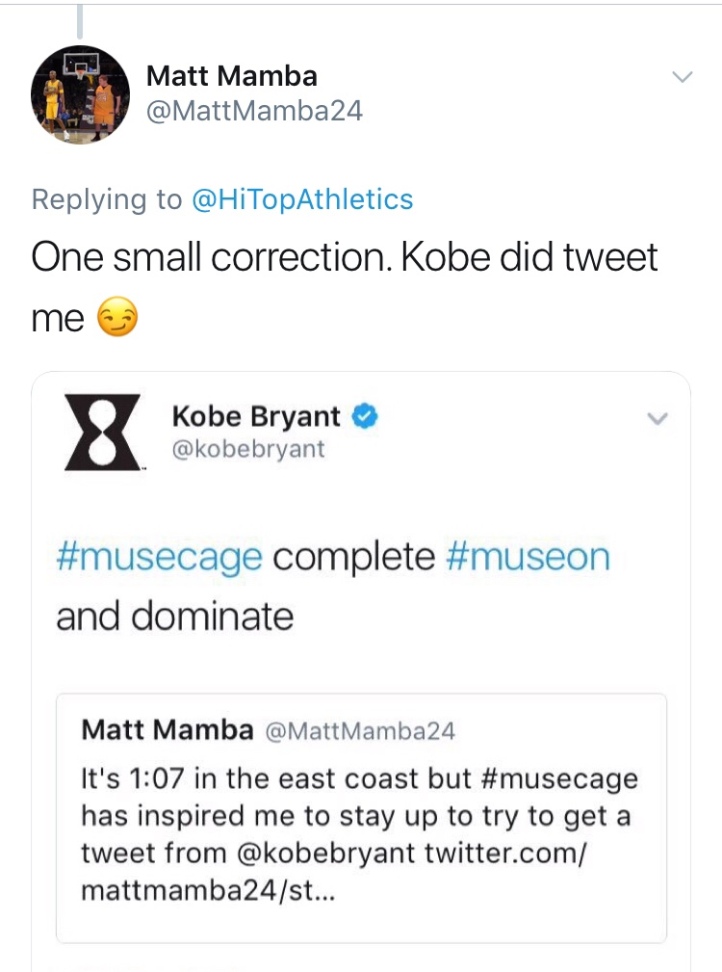