Draft picks walking up on to the stage to shake the Commissioner’s hand and then donning the cap of their new team has become a universal rite of passage in American Sport.

So it’s no surprise that the hat that draftees will be wearing has become a “thing” that gets hyped and then revealed cuz really what’s the point of anything if it can’t be hyped up to ridiculous scales, right?

Well the NFL released some images of the hats that will be offered up to new draftees in a few weeks an well…they are not good. Not good at all. Actually they are pretty terrible:

Here’s a close up on the Patriots hat: 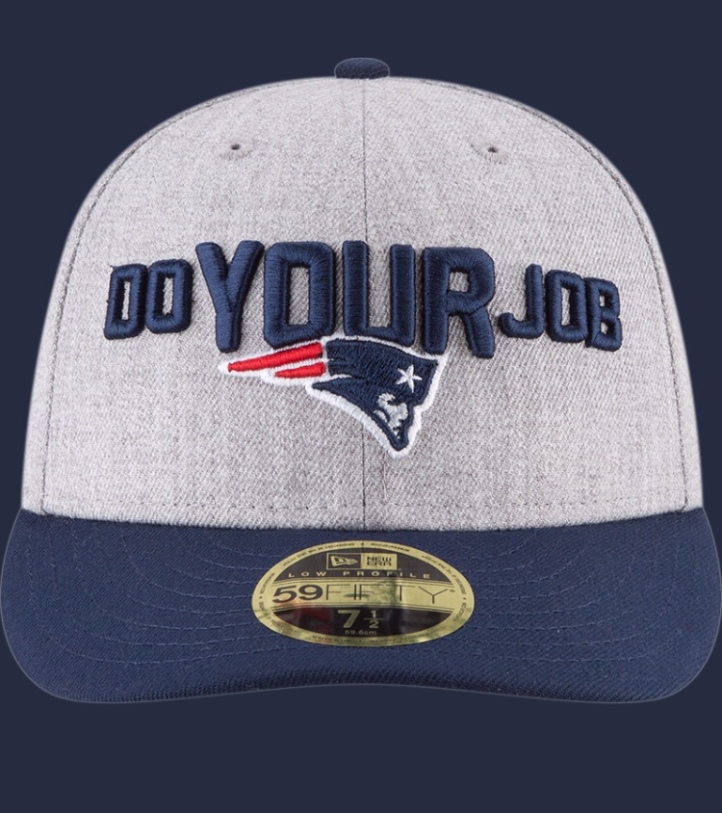 Ostensibly these are supposed to be “TeamSlogans” or something and I guess some are but Mob Squad for the Rams???? Is that really a thing? Cuz if it is it shouldn’t be. Never heard anyone call the Giants Big Blue in my life. Do Packers fans actually say Go Pack Go??? And Go Fins is just sad. And even the ones that are known associations like Dallas and America’s Team…well the design of hats are still straight rubbish. The absolutely gigantic lettering is a hideous look. Who ever came up with this design style needs to rethink their career choice.

And there’s the New England Patriots.

The Lil’ Dogg is officially O-V-E-R “Do Your Job”. Enough is enough. It had a good run but it’s time to move on. When the joker in line at Dunkies who never played a snap of tackle football in their life can’t go two sentence without saying “Do your job” well that’s when it’s time to take the ol’ catchphrase out back and put it down gently.

RIP in peace “Do Your Job”.