Sneaker Wars – Which 90s Hoop Sneaker had the best Commercials? A Hi-Top Investigation

Sneakers were a Big Deal in the 1990s and the pair you wore meant a lot about who you were or wanted to be. Your choice of footwear quite literally put your life into your feet. If you walked around Medford Square with your guard down there was a 50/50 chance you’d be going home in just your bare socks while some fool ran off with your Air Barkleys. It was real out in the streets.

And on the TV screen basketball shoes ruled the airwaves as well.

*Now let’s just take a second to say that Air Jordan is, was, and will forever be the King of Sneakers and he also had the all-time greatest commercial campaign with the Mars Blackmon spots so let’s just put Mike to the side and discuss which other sneaker campaign was the greatest.

There have been a ton of great basketball commercials over the years but in order to focus things and narrow our selections down a bit, to qualify for this particular list let’s only look at series of commercials or “campaigns” as the Advertising World would call them.

The Hoop Headz at Hi-Top HQ always go the extra mile. We combed through the archives, examined every commercial frame by frame and studied the specs of each sneaker down to the tiniest detail.

We will be judging on three main categories:

Creativity – How cool was the marketing campaign? Were the commercials fresh to def or whack as hell?

Star Power – Which NBA Baller was endorsing this shoe? Was it a real All-Star or a Wannabe?

Sneaker – Was the actual shoe dope or trash? Would you show up to your local court rocking these bad boys?

Of course we will be using the patented 13 point scale to rate out each campaign and determine once and for all the greatest Sneaker Line of All-Time (of the early to mid 1990s excluding Air Jordans).

The best way to approach this is brand by brand so first up:

Reebok was forever playing second fiddle to Nike (and these days probably doesn’t even make it into the orchestra, is there even a current NBAer wearing Reeboks?) but they did have a nice little run in the 90s with the invention of the Reebok Pump shoe:

Above the Rim was Reebok’s attempt at gritty, hardworking, “for the love of the game” style hoops.

“Above the Rim” takes a big hit here and it’s all because of the black & white film choice. The Lil’ Dogg gets why they did it but facts is facts and Nike and Spike Lee had B&W on lock down for years before this line came along. Even though these spots were tonally very different from the Lee helmed Nike spots they could only pale in comparison to Mars Blackmon’s greatness.

Reebok, bless their little hearts, were trying so hard but they were just never going to get anyone above a B level star. The roll call here is Dee Brown, Doc Rivers, Reggie Lewis, Steve Smith, Horace Grant and (pre insanity) Dennis Rodman. Some nice players but not exactly SuperStars.

The Pump was sweet. There’s no denying that. And while the original first version of the Pump was big and clunky, the Above the Rim version was niiiiiice:

Next up we have Reebok’s other notable 90s campaign Blacktop, an attempt to capture the Streetball market.

Quite the contrast in styles here as Blacktop really bridged the transition from the bright colored fun early 90s to the hardcore dark mid 90s. It’s really something to go from wise cracking Sinbad to an Onyx style dude barking into a mic in just a few years but hey that was how fast things changed in the 90s and Blacktop was trying to keep up. You can really see how the early commercials were playing off of a White Men Can’t Jump look before they pivoted to a more slampocolypse now thing. They were certainly trying.

3 points for Sinbad and don’t get it wrong here early 90s Sinbad was actually cool, but just no real NBA players to be seen.

The Blacktops and the Above the Rims were basically the same thing so while the ATRs got an 11 the Blacktops get knocked down a few units for not being anything really new.

Converse owned the sneaker market for roughly 50 years until the Air Jordan showed up. In the 90s they attempted a comeback led by Larry Johnson and the Grandmama Converse React.

Grandmama came out of NOWHERE and was instantly the greatest thing in hoops. Everyone loved Grandmama.

Larry Johnson was a pretty big deal coming out of UNLV, easily the biggest star to come out of college in years. Underrated star Power here.

The Converse React was actually a pretty cool looking pair of kicks. Stylish but not crazy, sturdy but not bulky, it was definitely a sneaker that caught people’s attention.

Where to start? Nike launched a lot of lines in the 90s so there has to be some pre-recs to cull the wheat from the chaff. The ones that made the cut here were the shoes that had the best combination of everything we are looking at – cool shoes worn by stars in awesome commercials.

You’re looking at peak Native Tongues era hip-hop style right here! These commercials are a thing of beauty and “I got skillz” is an all-time line. Listen if the Lil’ Dogg could choose any fantasy land to live in this pup would be paying rent to Spike’s Urban Jungle Gym for all of eternity.

Spike Lee is the real star of any Spike Lee Joint but Tim Hardaway was on the come up for real when these spots dropped. RUN TMC was the proto hoops-hipster team of the early 90s. Obvs the post playing days were rough for ol’ Tim but in his UTEP Two Step heyday Hardaway was a legit real deal Star.

This is where the Air Raids take a hit. The shoe itself was just not great at least by Nike standards.

Casting David Robinson as a pre-school teacher seemed like a too obvious Mr. Rogers riff but the acting job by The Admiral is so unexpectedly top notch and kind of weird and kooky that the whole thing just works perfectly. The whole gimmick hinges on Robinson’s acting and he pulls it off like a trained thespian.

If Jordan is a 13 then Robinson, Barkley, Payton and all the rest that passed through Mister Robinson’s Neighborhood were only 1 notch below. The cream of the 90s NBA crop right here folks.

Robinson’s Air Command Force was a hi-top in an era of mid-tops. Created with pump-like technology and an air bladder system to compete with The Pump, it’s actually a pretty dope looking sneaker.

Mister Robinson Overall Score – 34 out of 39

Tapping the manic genius of Chris Rock to play off the relatively sedate Penny Hardaway was a stroke of well genius and the inclusion of Tyra Banks made perfect sense in the 90s (young Tyra was something else) but none of that can completely make up for actual Penny’s lack of cinematic charisma.

Lil Penny is the true star here but actual Penny was quite the household name himself. Pre-injury Penny was a transcendent player the likes we had not really seen before.

The Lil Penny Posite just lacks something for the Lil Dogg’s taste. There’s just no “there” there for this pup. Facts is facts. 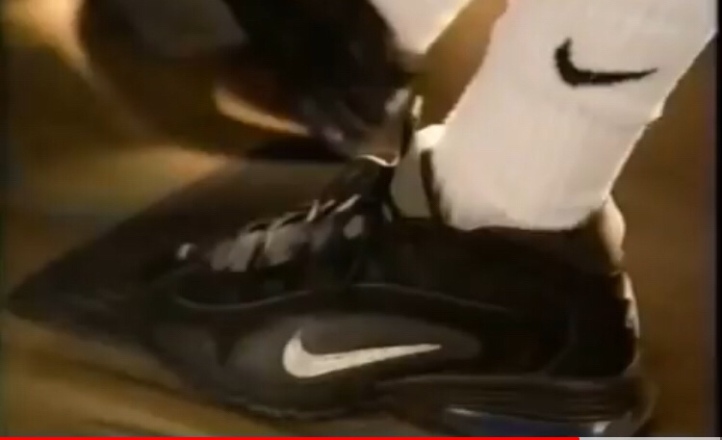 The Lil Dogg has to be honest here folks and the winner here is a shocker but facts is facts and Mister Robinson takes home the prize with a 34 out of 39. You can’t argue with math and the math says The Admiral is the champ.