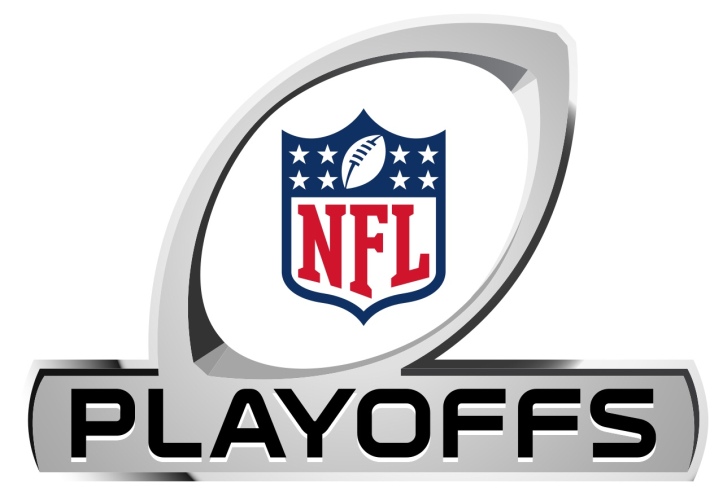 Before we dive into the games, been getting a lot of questions about how PPP gets all the interesting factoids and statistical nuggets we include in our breakdowns. The truth is we read all the stuff out there (so you don’t have to), but really want to give a big h/t to the work being done over at Football Outsiders. They have detailed analysis and get deep into the nerdy numbers but all in a very readable way. After you have read everything here at HTTA, check them out. Football Outsiders definitely gets the Hi-Top seal of approval. Now onto the games…

The Story: To be the Man, you gotta beat the Man!

The Keys to the Game:

Lots to get into here. Obviously first and foremost what impact will Tom Brady’s injured thumb have? Since nobody knows the extent of the injury or how he has looked in practice, it’s a huge unknown. We’ll analyze this game as if he’s mostly healthy, but if he’s not, then all bets are off.

Prior to Thumb-ghazi (😉) we here at PPP thought the greatest unknown in this game was going to be who are the Jaguars, really? You think you know but you have no idea. You think they are the #1 DEF in the league thanks to an otherworldly pass DEF and a smash mouth OFF that uses a stout running game to control the clock and minimize mistakes by living twitter joke Blake Bortles. They played a last place schedule in the worst division by DVOA. They lost to NFL lightweights the Jets, Cardinals and 49ers (w/Jimmy G) and twice to a Titans team that just looked like a JV squad last week against these same Patriots. They have proven they can beat the Steelers and we are not sure who else.

Pass DEF is the strength of the team with both a strong pass rush and maybe the best pair of CB’s in the league. However, since week 9, the Pass DEF DVOA ranks 6th overall. It’s still very good but it came back to the pack, losing nearly 20 percentage points on their season long DVOA score. The running game? Season long DVOA is a meh 12th. Since the Week 8 bye, and including the playoffs, work horse RB Leonard Fournette is averaging just 3.3 yards per carry. Frankly PPP is having a hard time figuring out what the Jags will do well on OFF. Sure the Patriots have the worst statistical DEF in the NFL’s final four finishing 31st in DEF DVOA. But the Jags haven’t shown to have the strengths that really exploit the Pats weaknesses. NE ranks dead last in rush yards allowed up the middle, but JAX’s rushing OFF is only 22nd in that category. The Patriots ranked 26th against opposing No. 1 receivers and were an average defense against No. 2 and “other” wide receivers. But the Jags field a group of pretty non-descript WR’s who would probably all be an “other” receiver on almost any team.

On the other hand the Pats are who you think they are. #1 in OFF DVOA, #4 in DEF Red Zone DVOA and since Week 10, the Patriots were tied with the Saints as the No. 1 run offense in the league. And here’s a fact that should terrify any Jags fan, especially after watching how the Pats attacked TEN last week: in Receiver specific DEF stats the Jags rank 20th against tight ends and 15th against running backs. Even worse when opponents come out in 12 or 21 (either 2 back or 2 TE) personnel the JAX DEF allows a 72 percent completion rate and 9.0 yards per attempt. That’s music to Josh McDaniels’s ears.

Last: JAX ranked dead last in OFF DVOA in late and close situations — second half or overtime, score within one touchdown. On the plus side their DEF ranked second in the same situations.

Jalen Ramsey: He’s had a lot to say this week, but the All Pro CB definitely has the talent to back it up. The Pats have a long history of shutting up loud mouthed opponents, will he be next? Does he get a chance to cover Gronk?

Nate Solder, Joe Thuney, David Andrews, Shaq Mason and LaAdrian Waddle/Cam Fleming: Everyone knows that Tom Coughlin’s Defense Against the Dark Arts of Brady/Belichick starts with getting pressure with just your front 4 D-lineman. And these Jags definitely have that ability. Can the Pats O-line hold up? Their confidence should be high after pitching a shutout against TEN. Waddle is officially listed as questionable on the injury report, so that could be something to watch.

The Pick: Tumbs up… Patriots 27 Jaguars 14… Are we sure that these Jaguars aren’t just the Titans with better PR? Just don’t think they can score enough to keep up with the Pats who have the right weapons to attack this DEF.

The Story: One of these times you are going to reach into the hat, and the rabbit isn’t going to be in there.

The Keys to the Game: These two Conference Finalists have become surprising mirror images of each other. Both have top 5 Defenses by DVOA, that include no worse than top 7 rankings against rushes or passes. Both have a pair of playmakers at WR and Rushing attacks that rank in the middle of the league (MIN 18th and PHI 17th by DVOA) that are really used more situationally and would best be described as stat accumulators as opposed to game breakers. Of course the most relevant similarity is that both are now quarterbacked by players who have been described as journeymen, back-ups, or bad. So which QB won’t find the rabbit in the their hat this week?

It’s a little lazy and obvious to say that this game will swing on which QB makes plays and avoids mistakes. Honestly both of these QB’s are flawed, and facing top DEF units. This is shaping up to be a close game. What it’s really going to come down to is which coaching staff is able to put their QB in situations where they aren’t asked to do too much, and try to exploit weaknesses.

Last week, on paper Nick Foles had the type of “game manager” performance that the Eagles need him to have. He went 23 of 30 for 246 with no TD’s and more importantly no INTs. Couple that with a ground game that while it didn’t put up huge totals (32 carries for 96 yards), was effective at keeping the offense on schedule with down and distance and sustaining drives to keep the clock moving. Looking under the hood on Foles’s performance one can see both the genius of coach Doug Pederson’s game plan and some areas of concern for this week. First, take a look at this graphic from NFL Next Gen stats, it tells the whole story: 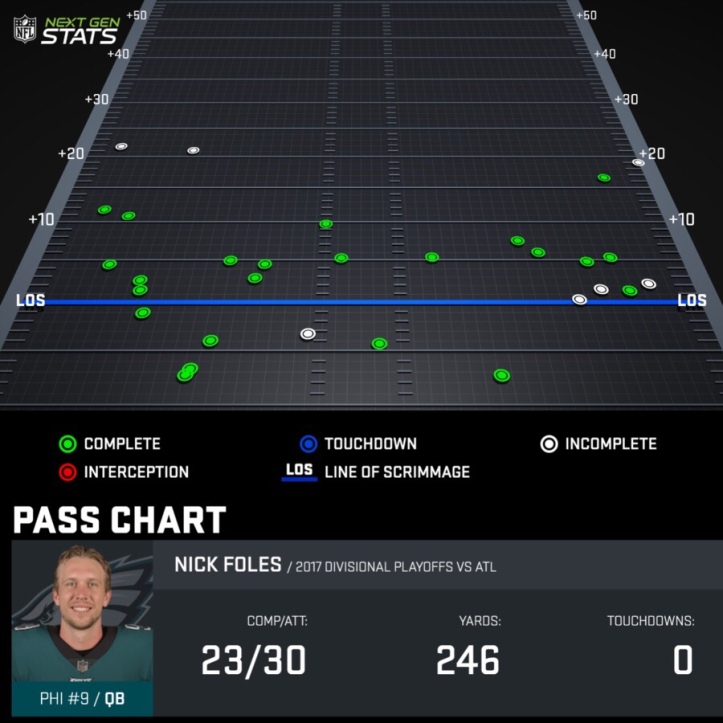 Foles’s average depth of target (how far he actually threw the ball on pass attempts) was only 5.2 yards. For comparison sake, the lowest season long aDOT for all qualifying QB’s was 6.9 yards. Additionally the Eagles OFF relied heavily on Run Pass Option (RPOs) plays. These types of plays are designed to simplify the reads for the QB and just happen to be the type of plays that were the focal point of the Chip Kelly OFF that Foles had great success in back in 2013. Safe throws, easy reads, get the ball out quickly and let your play makers make plays. Smart plan, good work Coach Pederson. Those are also the type of plays that specifically exploited things that an overall average at best ATL Def didn’t do well like defend pass catching RB’s. The MIN DEF is a whole different animal. It ranks in the top 10 against top two wideouts, receiving backs, and tight ends. The Vikes rank second against short passes, and allow the fewest yards after contact per run in the league according to ESPN. They also stop the big plays well, ranking 10th against deep passes. Just like last week, we could keep throwing out stats about how good the MIN DEF, but by now everyone should know. So Coach P, what do you got this week, because last week’s plan ain’t going to cut it.

While Foles has been looking for his hot streak since 2013, Case Keenum is having his right now. His confidence also has to to be at an all time high after leading his team on an epic game winning drive and throwing one of the most iconic TD passes in NFL history. But let’s face it minus some good body control by Stefon Diggs and an epically bad missed “tackle” by Marcus Williams that play never happens. In fact Keenum probably would have been defined by his bad interception (also by Williams), that let the Saints back into the game. That’s probably the Case Keenum experience right there, capable enough to get the ball to his playmakers but also just as likely to make the big, momentum shifting mistake. The MIN staff has also looked to get Keenum into plays where he can succeed. The Vikes ran the 2nd highest percentage of play action pass plays in the league and gained an average of 8.7 yards per those plays. Without play action they averaged only 6.4. Scheme helps but so does talent. Case in point, in 2016 Keenum then with the Rams ranked dead last in QBR while under pressure this year he led the league. With MIN he is able to throw the ball to Adam Thielen, who led the NFL in QB under pressure targets (40) and yards (397). Thielen’s (and Diggs’s) ability to make tough catches probably had more to do with Keenum’s success than any real skill improvement. A couple of other trends to watch. Keenum was much better against zone defenses, posting a 70 percent completion rate compared to 58 percent against man coverage. The Eagles can exploit this as they were strong in man coverage schemes allowing 51 percent completions with just 6.0 yards per attempt and a 73.0 passer rating. To put a finer point on exactly what the Eagles should do, the Vikes scored 14 points or less in the only 3 games where teams blitzed them less than 20% of the time. PHI needs to sit back, get pressure with their strong D-line, man up or double on the outside and really force Keenum to make tough throws to beat you. Will he keep finding the rabbit or will the magic run out?

8. That’s the number of extra points Vikes K Kai Forbath has missed in his time with MIN. This is going to be a close game and MIN has a tortured history with post season kicks.

314. The the numbers of yards Eagles WR Alshon Jeffrey has totaled in 3 home starts against a Mike Zimmer led DEF. In a game thirsting for a big play, could he do it?

Fletcher Cox– a key to the Eagles stout run DEF and he had a 28.5 pressure rate. The Vikings had the 3rd most plays with blown blocks in them this year, and Keenum has taken multiple sacks in each of his last 7 starts. A big sack or rushed throw could be enough to swing this game.

Harrison Smith– amazingly all 11 of MIN DEF starters have been with the team for at least 3 seasons. This unit has been building towards the special type of production they have put up this year. Smith, the All-Pro safety, is the QB of the DEF and is typically all over the field.

The Pick: A good magician never reveals how they do their tricks… Vikings 21 Eagles 17… As we have been saying this will be a close game all the way through and the Eagles get a bump from the home crowd. But the Vikings are just better. The Eagles have a great DEF this year, the Vikes unit is one of the best in recent memory.