I am a Medford guy through and through. Haven’t lived there in about 10 years, but it’s in my blood. I had the occasion to swing through the old stomping grounds lately, and when I stumbled upon the new Wegmans I was taken aback. Now, don’t get me wrong. I LOVE Wegmans. Best store around, bar none. I live in the ‘Rica, which has 3 Market Baskets, and I still drive to Burlington just to shop at Wegmans. But the store in Medford bothers me, because it’s on the site of the (infamous) Meadow Glen Mall. 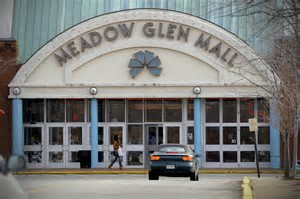 As malls go, the MGM was not a great draw. But for me, and many a kid in Medford, it was a mecca. Every time I had more than 5 bucks in my pocket I’d jump on the 134, head down to the mall, and hand over my cash either at Sam Goody on any CD that had a Parental Advisory label, or on the latest hot poster from Spencer’s.

The Meadow Glen Mall also holds memories of some great brushes with greatness for me. I had three celebrity encounters on Riverside Ave that stay with me to this day.

The first two were casual. On separate occasions, I ran into Dee Brown, and Scott Zolak. While exciting, they didn’t hold a candle to meeting Randy “Macho Man” Savage.

When my friends Christian and Ryan and I heard Macho Man was doing an appearance at the mall, you know we had to check it out. Their dad, wrestling fan and legendary CYO basketball coach Eddie, took us down for the event. By the time we got there it was packed, we couldn’t get close. But Ed had another idea. 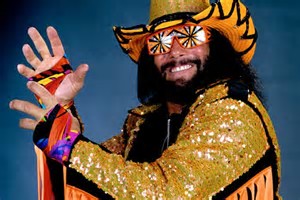 I remember him saying “There’s no way he’s pulling up in front, let’s go around back and we’ll see him”. We ran around to the back of the mall just in time to see the limo pulling up. The door swung open and right there in front of us, stood the legendary showman. There weren’t any fans back there besides us, really, but he was already ON. He gave us an “Oooooh yeah”, as we struggled to get out our rehearsed line “Hey, Where’s Elizabeth”…really good stuff. He shot us a look, but I know deep down he appreciated the ball-busting.

We ran back around front and into the mall for the autograph signing. The line wound halfway down the mall, from the “Food court” (generous description) practically to Kay Bee Toys. No chance we were going to the back of the line, and even if we did, we wouldn’t have made it to him before the event ended. We went up near the front of the line to get a good look at Savage…man he was impressive. Just then, genius struck us. Without saying a word, we all knew what to do.

Ryan leaned over the rope and dropped his sharpie on the floor, right in the middle of the line. Just as that happened, I looked up at the stage intently as if something important was going on…this drew the attention of those around us as well. Once focus was on the stage, Christian ducked under the rope, muttering “Damn, I dropped my pen”, and just like that…we had an inside man. It was all executed in about 2 seconds, and it was perfection. Christian was only like 20 people back from the front of the line.

When Eddie realized what we had done, he was almost speechless. He didn’t come right out and say it, but I knew he was really impressed by us. A simple high five said everything.

We drove home shortly after, 3 kids with newly minted Macho Man autographs in hand, and one dad beaming with pride.