The biggest Olympic cheater of all time, turned murderer, Oscar Pistorius has had his sentence increased- nearly doubled actually- to 13.5 years. That’s terrific. This guy is guilty as hell, and an all-around dirtbag (I mean, just check out the sunglasses he’s running in), but what is really interesting is the South African legal system at work. 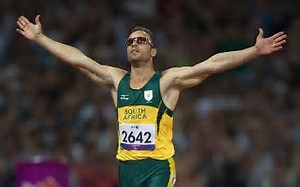 My working knowledge of the US legal system comes from Law and Order episodes and a handful of conversations with a non-criminal attorney and an ex-cop I know. Nevertheless, I’ll give you a quick rundown and my take on the case:

Sooo many questions here. The South African system seems overly lenient, and overly harsh all at once.

Convicted of manslaughter, but then let out on house arrest after a year??? Then, there are two appeals conducted AGAINST the defendant, and he lost both?! How are there appeals against a defendant? Makes no sense at all.

The first time, they decide to find him guilty of a completely different crime, without a different trial… but then only increased the sentence by 1 year? Is that even worth the trouble?

The next appeal is just like, hey while your in jail, we’re just going to go ahead and redo the sentence…and since we ARE the Appeals Court, good luck appealing it???

Listen, this guy was guilty of cheating in the Olympics, running with lightweight springs, a total advantage. And he seemed guilty as shit in this case, so the ultimate result good with me. I just think it’s an absolutely ridiculous system from almost every angle.