NBA Rewind – The Morning After

For those of you who may have missed the Match-Up of the Millennium that final score was Celtic 92 Warriors 88.

The hero of the night for the C’s was certainly Jaylen Brown who led the Celtics with 22 points and 7 boards while providing a spark and energy along with solid D.

Jaylen’s performance is quickly turning from impressive to heroic as details are emerging that a close friend of Jaylen’s had passed away and he was potentially not even going to play in last night’s game. Thoughts and prayers to Jaylen and the family of his friend who tragically passed at a young age.

That one was for you bro !! #RIP pic.twitter.com/Rnvy54Wsh2

On the other end of the spectrum, the Warriors seem to be embracing their inner wrestling heel as Chef Steph had this quote post game:

"I heard the weather is great here in June." – @StephenCurry30 after loss to Celtics #InsidetheNBA pic.twitter.com/9L09XRGpTH

Facts is facts and the plain truth about last night is the Warriors shooting was bad bad very bad, especially considering their normal expected rates. Check out the box score: 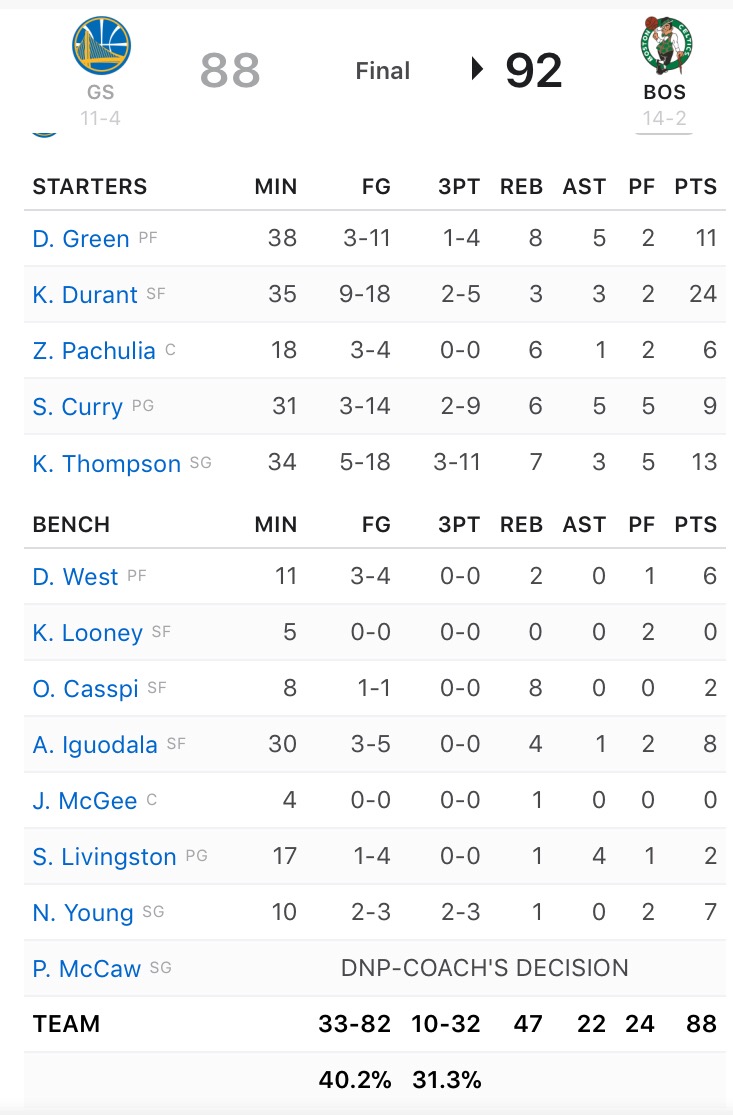 KD was the only Warrior having a decent night. Why he failed to take over the game, demand the ball, put up more shots is anyone’s guess. You would think in year 2 after the Finals performance he had, any thoughts of “fitting in” or not wanting to ball hog in Curry’s face would be null and void.

Was this performance by the Warriors scorers just an off night or a product of the Celtics D? Certainly we know the C’s perimeter defense is stellar this year and their ability to muck up a game like they did last night just might be kryptonite for the Warrior Supermen.

We are a loooooong way from June but Steph Curry seems to think so.

Hey Steph the weather IS amazing here in June. I’ll even treat you to a lobster roll myself.